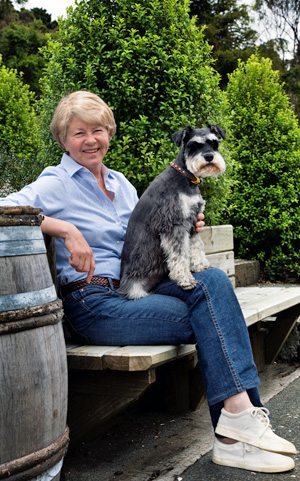 Owner Liz Morrow & Sammy the Schnauzer
OMAIO a Maori name meaning “place of peace, quiet and tranquility”, is our coastal property of 18 acres (7.28 hectares) on the Takatu Peninsula, one hour’s drive north of Auckland and 10 minutes from Matakana. Islands, Kawau, Goat, Rabbit and The Bee Hive in Kawau Bay, are viewed from the log cabin. The cabin nestles in a NZ native bush setting with the largest of the feature trees being a Puriri estimated to be between 800 & 1,000 years old. While the planting is predominantly native, there is a fusion of other carefully selected plants which suit the location and setting. The garden surrounding the cabin is laid out in curving, flowing shapes reflecting the waves and coastal shapes beyond.

There is some formality in the clipped specimens, plant shapes and textures. The repetition of the plantings throughout is effective, providing continuity which does not compete with the natural surrounding bush. The canopy of established native trees provides protective shade where clivia, hydrangeas, arthropodium, bergenia, ligularia, hostas and ferns flourish. “Omaio” was planted to create calm – the colour palette is soft, tones of green dominate, it is relaxed and easy on the eye. A far cry from previous rose and perennial filled gardens I had created!
The crushed shell path “Jane’s Lane”, takes you to the raised koru shaped vegetable garden and small orchard which is situated in a sheltered bush clearing. The koro garden, although small, provides an ample supply of vegetables throughout the year. The path from this area, lined with arthropodium, cream clivias and hostas, leads through bush and a mature stand of Kauri, Rimu, Totara, and Pohutakawa, to “Johny’s Deck” a viewing platform on the water’s edge.

The cabin was built in 1980 as a holiday retreat and I, with help from son John, started development of the garden from scratch in June 2006 after we moved to settle permanently in December 2005.

In 2010 Liz was elected a Fellow of the Royal NZ Institute of Horticulture for services to Horticulture.